Sex in front of the Hard Rock hotel

Hello dear followers and voyeurs, today some sex in front of the Hard Rock Hotel is waiting for you in the photo gallary

Tuesday I posted the pics, but I didn’t have time to write the blog, because I have been occupied sorting pics and videos and making camsex on skype with all my fans and slavedicks since we came home from Canada and France some days ago.
We spent the last days in Barcelona, we arrived thursday afternoon, showered and prepared to go to the Ramblas making some upskirt pics and visiting again, we havent been there for a few years now. A friend called me on skype just before leaving so we spent some time talking to him…and lucky for us, because switched the Tv on where we saw the attack.
Thanks for all the emails asking if we were ok, I think I answered every single one the same day, but thanks for asking 🙂 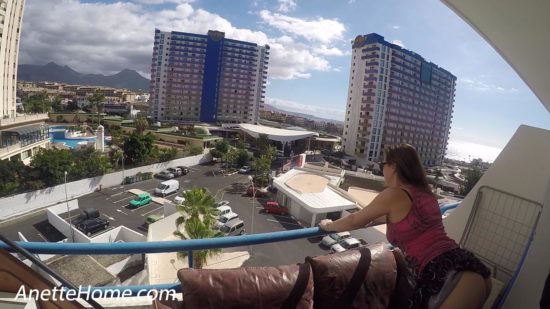 The set of pics I posted for you are made on our balcony inour apartment in the south of the island. Our friend the bricklayer is spending his time there making some reforms. It’s just in front of the Hard Rock Hotel so that day we had ome sex on the old sofa he put out on the balcony. It’s exciting because our apartement is just above the main entrance, so everybody going in just need to look up to see what is going on. The clients in the 2 hotel building and the third apartment club building just have to watch in front and they will have an idea what is going on, I think you cant see us directly, bu it’s always exciting.
Threesome on the balony in front of the hotel

Sex at the pool

We are a real amateur couple, we created this site in 1999 and we have more than 600 member watching us every day on our livecams here in our house. 95 % of our members stay for more than 3 months. Since the beginning more than 40.000 people subscribed to our site.